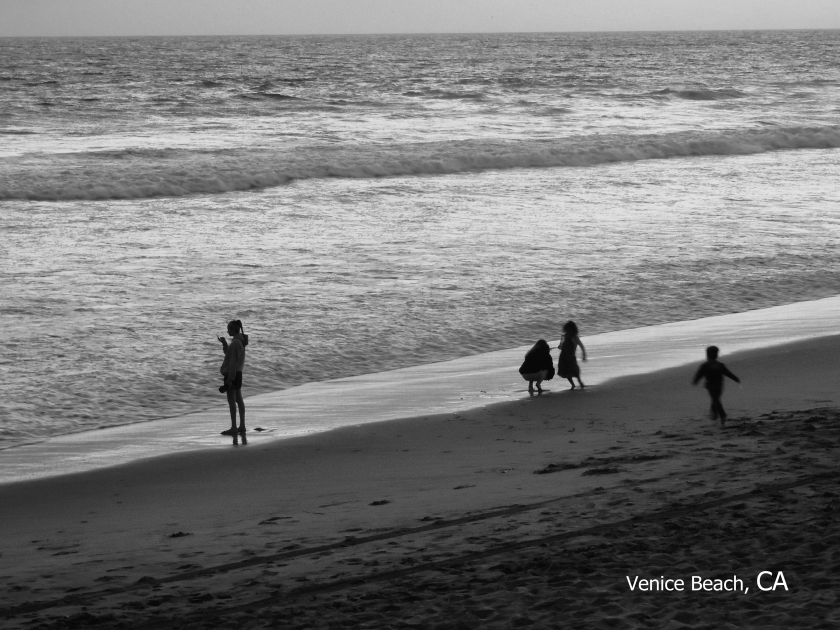 Day Six of Seven Days of Black and White

This has been such a fun project! Only one more day to go, but that doesn’t mean I’ll stop blogging. Photography and writing feed my soul.

This particular image was taken when I was with my BFF, Patricia, when we were on one of our adventures, this time in southern CA at Venice Beach. As I look at this, I’m aware once again of the power of the ocean to make me feel humble, peaceful and serene. And the value of friendship.

Don’t you just love looking at a photograph and being instantly transported back to that time and place?

Go to the beach! 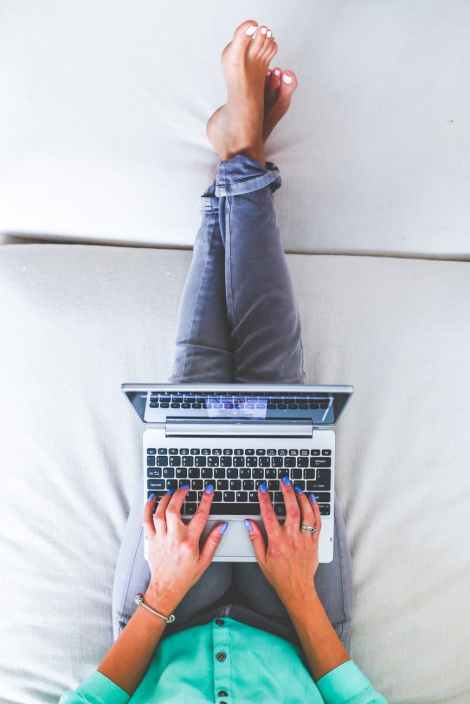 It’s gonna tell you that you need to edit as you write. Do not fall prey to that temptation. It will stop you from creating, from telling your story. You can always go back and edit later.

We are all storytellers. We all have something to say.

What if part of your legacy is to tell your story in written form? What if it’s fiction? Any good work of fiction is based on characters that are known to you, most especially you.

Even if you have no desire to write a book, write something. A short story. A poem. A letter. Keep a journal. Write a note. (Who doesn’t love getting handwritten notes)? But write! It’s good for your soul.

I used to keep handwritten journals. Lots of them. My thinking was that, after I’m gone, my kids will be able to read them. But now, with the digital age, most of my journal keeping is done on a private online app. Which means I’ll probably have to write down the password and put it in a sealed envelope to be opened after my demise.

Either way, they’ll know things about me that they didn’t know. Kinda cool.

Are you wanting to manifest something in your life? Is it tangible? A thing or things? Is it a new home? A new car? More money? If it’s any of these things, write it down!!! But don’t be so specific that it limits the Universe in giving you what you want. And always add this or something better.

I’m a big fan of the Universe. It’s a vast field of potentiality. So today, I want to share with you one of my many experiences with how it bestows blessings upon all of us.

Years ago, living in southern CA, we wanted to move back to AZ, so I wrote down the kind of house I wanted to live in there. It had to have lots of light, a sweeping view of the Catalina mountains, in a nice neighborhood with fantastic neighbors, and most of all, we had to feel good living there. The kicker was that at the end of my description I added this or something better. (The Universe being the benevolent benefactor that it is, I trust in it completely to know better than me and my mere mortal thinking).

We made the move back to AZ and ended up renting a house until we could find just the right one to purchase. We found one. It didn’t match what I had written down, so I thought we’d have to settle for it. But most of all, it didn’t have the feeling I wanted. Then (drum roll, please) just about a week later, one came up that matched my description perfectly. When I walked in the front door, it took my breath away. There was the wow! sweeping view, a house full of light, and many other ‘something betters’ that I had not even written down.

The seller was asking much more than what we wanted to spend, but I knew without a doubt that if we were meant to have it, a way would show up. The ways and means materialized in such a synchronized fashion that it was truly miraculous. I’m smiling right now from ear to ear as I think about it.

But that’s not the end of this story. I also wrote down that I wanted to be a Cadillac driver (for some reason I’ve always liked them).

My Mom called one day and said, “My neighbor is selling her Cadillac. Come look at it.” I explained to Mom that we already had two cars and didn’t need a third. Resistance? She convinced us that we should just come up there and look at it. We did. We ended up buying it. So I became a Cadillac driver. That was fun!

But again, the story doesn’t end there. The lady we bought it from was a phenomenal woman, one whom we became dear friends with. Love her! She was selling this car because she was buying another Cadillac from a friend of hers. So we asked her when it came time for her to sell that one, to please give us first chance at it. She did. So …. we had not one, but two Cadillacs.

Lesson? Never, ever limit the Universe and its power to provide This or something better.

If I can do this, so can you. Write it down! And then trust the Universe to show up.

Here’s the story in a picture. The house and both Cadillacs. Grace on the left. Lady Pearl on the right. (Yes, I named them. Haha!)

Okay, I have to go now. Lots to write down 🙂 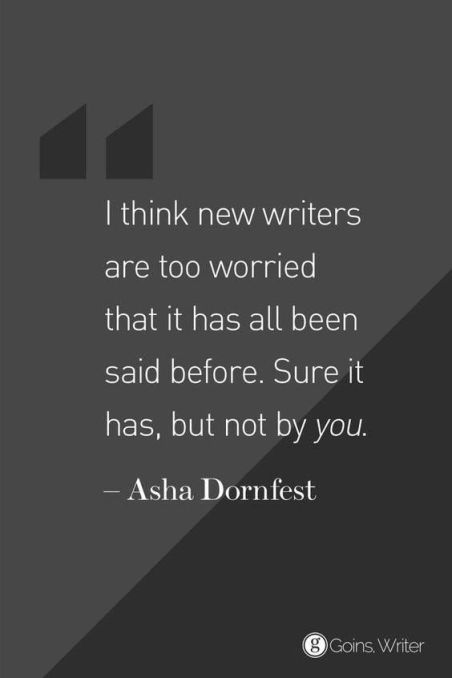 Please, please, please … write because you have something to say. Not because you want to impress the reader. Your writing will not appeal to everyone. That’s okay. It will to the ones who need it the most.

Write from your heart. Let your feelings flow. Get it all out. You can always edit later for style, grammar and punctuation.

And yes, it may have all been said before. But not by you. You are unique; one of a kind. You have a voice. There is no one else like you on the planet. Celebrate that and share it through your writing.

Who knows? Your writing may just fill up the cracks in someone’s soul. You are such a messenger!

This quote is one that I found a long time ago, written by an anonymous author.  I liked it so much that I painted it on a wall in one of our former homes.  And now I have it prominently displayed in my workspace.  Anytime I become afraid of something, I try to remember it, and another of my favorites is from A Course in Miracles … (paraphrased) “If you really knew who walked beside you, you would fear nothing.”  How often we forget that.  It took me three tries to get through the whole course, going back as far as 1994 the first time around.  Truly amazing material.

Today’s photo is of my workspace.  (You inspired me to do this, Nick).  This is where I write my blog posts & miscellaneous other things like my Morning Pages and food journal, edit photos, correspond with my peeps, create my photo cards, etc.  So now you have a window into my world, including my abundance vision board 🙂  Abundance doesn’t just come in the form of money.

And, as you can see on my monitor, the stately saguaro is one of the pics that rotates through my screen saver.  To the far right, hanging almost out of the picture is my son’s Army dog tags.  I’ve been promising to send them to him but have procrastinated.  (I kind of like having them around).  He was in the 10th Mountain Division and discharged right before the first Gulf War.  Selfishly, as his mom, I was glad his time was up, but I’m very proud of him for his service.  My heart goes out to all of the parents whose children are currently serving in harm’s way, and especially to those who made the ultimate sacrifice. 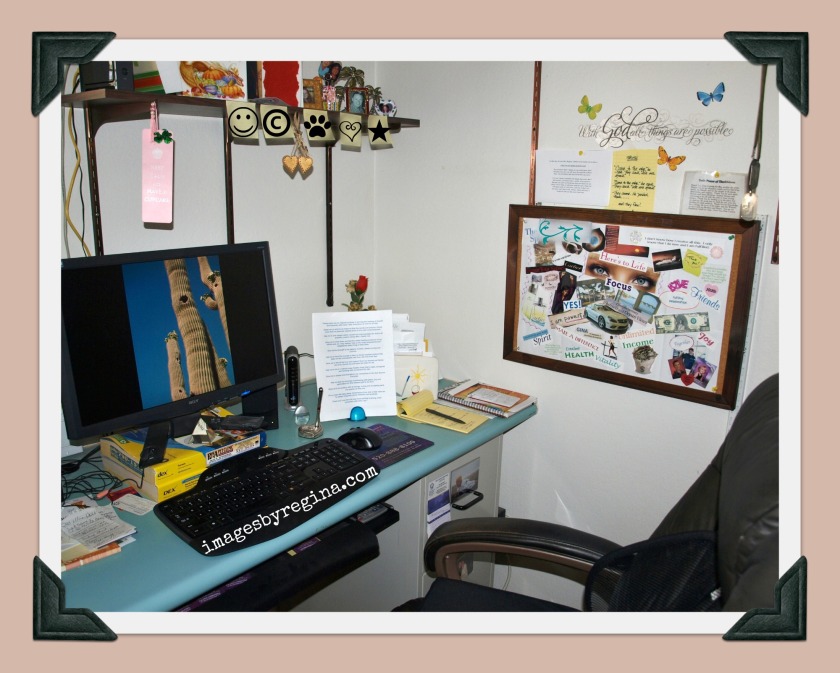